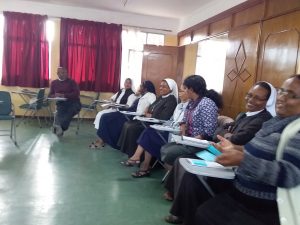 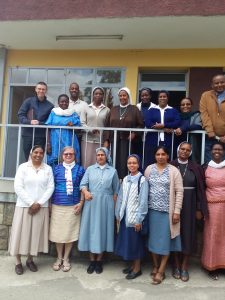 From 27-29 February 2020, around 25 participants ( Religious and lay people)  met in the headquarters of the Conference of Major Religious Superiors (CMRS) in Addis Ababa Ethiopia to discuss the possibility of forming a net work to address the pressing issue of human trafficking in Ethiopia. The main facilitator was Sr. Gabriella Bottani who is the main coordinator of Talitha kum in Rome, Italy. Operating under the authority of the UISG (International Union of Superior Generals), Talitha Kum is an International network of religious, working in fifty three countries worldwide with a mission to raise awareness on the issue of human trafficking. Under the frame work of  Talitha Kum , male and female religious and lay people work together at the National level to prevent further suffering caused by the evil of human trafficking and to offer what aid they can provide to survivors as they strive to integrate in to society upon returning to their home countries.

The main purpose of this workshop was to gather religious and lay people in Ethiopia who have a particular interest or activity related to human trafficking, with a goal of forming a Talitha Kum network here in the country. To further this end, on the first day of the workshop Sr. Gabriella informed the participants about the history, mission, vision, objectives and activities of Talitha Kum as an umbrella organization and how different Regional Networks associate themselves with it. She gave the participants a brief overview of the global reality of human trafficking as well as the International conventions to address it.  Much discussion was held on the definition of human trafficking, various crimes related to it as well as the distinction between trafficking and smuggling. The second day of the workshop was dedicated to an overview of the reality of human trafficking as it pertains to Ethiopia. Testimonials were presented form Ethiopian Religious and lay people working directly in the areas of prevention and survivor reintegration, as well as two former trafficked persons shared their painful experience of being trafficked to Saudi Arabia.

After being enriched by the different sharing and input, and considering the reality of Ethiopia the group really felt the need of having Talitha Kum network in Ethiopia. The time was given to develop mission and mission statements for the new network which is called Talitha Kum Tinsay Ethiopia.

A coordinating committee is formed who would be taking initiative to plan and implement the activities of Talitha Kum.

Through our collective efforts and living witness, we recognize the pain of suffering of all those affected by human trafficking. we Envision the fullness of life and freedom designed for the children of God and is guided by the Christian values such as compassion, mercy, dialogue, and collaboration

To reduce human trafficking in Ethiopia by preventing, empowering, re-integrating survivors (Victims) and their families through networking.